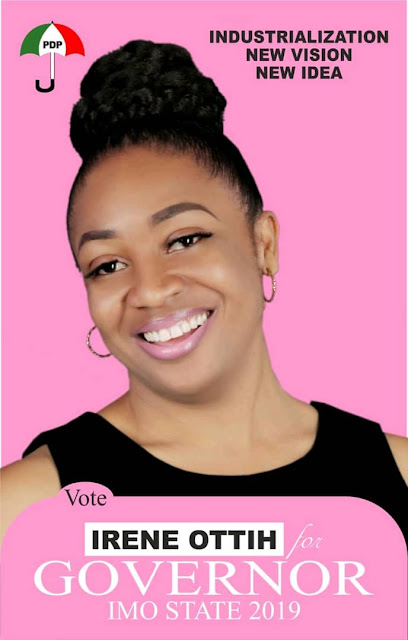 A young Female Technocrat vying for the Governorship seat in Imo State, Irene Ottih has said that the forthcoming governorship election in the state would be a referendum for the vibrant young artisans to decide and take the driver’s seat in Imo State.

Ottih averred that the election is about young technocrats with brains to in still change in all sectors of the state economy.

In a statement by her Special Assistant on Media, Austin Ebi, made available to journalists in Owerri, Ottih condemned non-inclusion of female technocrats in politics and governance, stressing that globally civilization has advanced beyond discrimination on gender basis.

The Governorship Hopeful pointed that Nigeria and particularly the people of Imo cannot afford to remain backward, citing female leaders who have and are still promoting human development, industrial and technological advancement in their state such as Angela Merkel of Germany and the President of Croatia.

She posited that merit should be promoted an not mediocrity, stressing that in this technology driven era, less attention is paid to what political party, who is on the seat of governance male or female, rather what is paramount is the deliverables, ability to deliver on their electioneering promises to the people.

Ottih alluded that her knowledge of the antics of successive government elicit her foray into politics in the state to right the wrongs, in still ideology, sensitize and educate Imo people that for too longer politicians had thrown dust into their eyes by dangling little carrots only to mortgage their future.

Continuing, the Governorship Hopeful noted that many have left abandoned projects, bereft of creative ideas to create jobs for the youths, lack innovative ideas to industrialize the state to become self-reliant, wallow in ostentatious live-style and wastage, enriching themselves and their family using the peoples (public) fund.

Ottih explained that their unpopularity and unacceptability is evident by deploring the people’s funds stolen from the state’s treasury to lure the youths into taking arms, promoting violence, snatching of ballot boxes to subvert the choice of the good people of the state.

Said She ‘’most of our leaders have no integrity, they are not accountable to the people because their emergence was fraught with irregularity and a process that lacks credibility, they send their children to school abroad and use Imo vibrant youths (young people) as thugs, and that is why we are educating the youths to stop the trend, it is no longer business as usual.

According to her, enough is enough, this nonsense must stop, we will resist it because sovereignty belongs to the people and the active population of any state that determine who wins in an election is the youths (young vibrant and energetic youths).

Ottih reiterated that throwing her hat into the race was born out of sacrifice because someone has to take the bull by the horn and put a stop to the wrongs in the state, adding that as a pacesetter, ‘’I will ensure that looting of Imo treasury must stop, dangling carrot to deceive our youths into four years slavery must stop, lack of industries, human development, technological growth and economic freedom must end.

Ottih, an accomplish Publisher, technocrat and a social mobilizer; reiterated that the election would be a referendum because the youths have been educated to jettison pecuniary gain and sensitized to know that power (sovereignty) belongs to them.

The Governorship Hopeful posited that the election is about the people, because the young technocrats and the youths come first, we will give them a pride by absorbing then in governance at different strata’s, they (young technocrats/youths) would scrutinize those jostling to lead the state based on their antecedent and track record.

She noted that the young technocrats, as well as the teeming youths would be told that they have the power to use their Permanent Voters Card (PVC) to effect change and decide who become the next governor, as well as other political office holders to pilot the affairs of the state for the next four years.

Ottih posited that Imo people, particularly the young technocrats and youths based on the new orientation would not vote along party line, rather they will vote for the renaissance wave of change to enthrone a new Imo thriving on transparency; accountable to the people and with hi-technological methodology to in still a new governance culture in the state.

She, however, noted that being a young technocrat, with wide exposure and experience, she would bring her dexterity to bare in governance, as concerted effort would be focused in infrastructural development, strengthens weak government institutions, massive industrialization to improve human development, as well as transparent management of Imo resources with monthly rendition to account to the people how their money is spent.

Ottih re-assured that her administration would return governance to the young technocrats, vibrant youths, care for aged persons, and that education would be invigorated because it the bedrock of development, ‘’we will promote the rule of law and be fair to all.

To this end, Ottih, lauded the people for the massive support and confidence reposed in her, and noted that renewed stand to change the wrongs in the state by exercising their franchise with their PVC was a step in the right direction, adding that whatever money given to buy their votes, is money stolen from them; even as she urged them to collect it and vote for technological advancement and industries, massive employment, empowerment, basic amenity and one promoting the rule of law which she represent to secure the future of Imo and that of generation yet unborn.