December 17, 2018
 The Vice Presidential Debate for elections 2019 held on December 14 and we have been collating reactions from Nigerians. However we found this analysis that we think captured our thoughts too finely written by Pulse ng. Enjoy reading below: 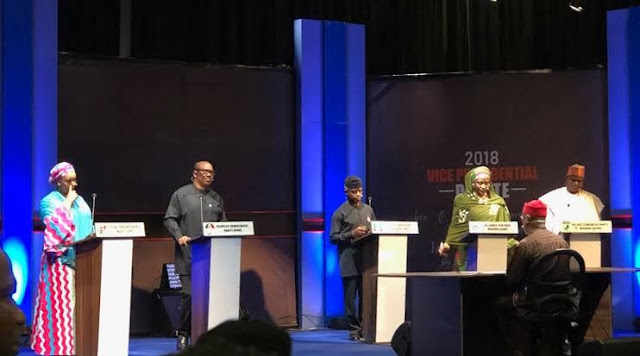 Pulse takes a look at the performances of the 5 vice presidential candidates who participated at the debate, ahead of the 2019 general elections.

On Friday, December 14, 2018, the Vice Presidential candidates of the PDP, APC, ACPN, ANN and YPP starred in the first of several televised debates ahead of the 2019 general elections.

Venue of the debate was the Transcorp Hilton Hotel in the nation's capital city of Abuja.

This is how the 5 participants fared during the debate put together by the Broadcasting Organisation of Nigeria (BON) and the Nigeria Elections Debate Group (NEDG).

She started nervously, but grew in some confidence as the debate wore on.

Not much can be said of where Abdullahi-Iya stands on some of the issues raised during the debate because she offered little by way of policy standpoints and proposals.

However, she chipped in a few strong points while countering some of the policies of the Buhari administration being touted by Osinbajo.

Abdullahi-Iya's best point has to be when she said local governments should be able to control their own resources and pay a tax to the center.

She had a good closing remark only because she read from a prepared speech. It was the one moment where she sounded like ANN presidential candidate, Fela Durotoye.

Otherwise, she stuttered, mangled and forgot her lines most of the time.

A good debate prep would put her in the mood for subsequent outings. Surely, one to watch out for in the future.

He had a night to forget.

Galadima certainly wasn’t ready for this debate and wouldn't have been ready if an extra 5 hours were added to the session.

He started nervously, picked up nervously and ended nervously. He was also all over the place, didn’t deliver a solid point worthy of recall and fumbled his lines.

Perhaps, his only stellar moment of the debate was when he reminded everyone that the head of the ticket, Oby Ezekwesili, is perhaps one of the best economic minds around.

Overall, Galadima did his party and ticket little favours here.

He started like a house on fire, reeling out statistics and proffering solutions to a host of economic challenges plaguing Nigeria at the moment. He certainly had Osinbajo in his crosshairs.

However, a host of Obi’s numbers didn’t add up following some fact checking.

The PDP candidate announced that Nigeria has 2 million cars plying the roads. The registered number of vehicles in Nigeria, according to the nation’s statistics bureau, is 11 million.

Some of Obi’s claims on Nigeria slipping down the global competitive index in 2018, were not correct as well. The World Economic Forum report states that Nigeria rose on the index by 10 places in 2018.

However, Obi floored Vice President Osinbajo on the petroleum subsidy debate. His argument that Nigeria is “subsidizing inefficiency” is right on the money when you consider that the subsidy regime on petrol hasn’t significantly impacted on purchasing power or improved the economy in any way, shape or form.

Nigeria is better off finding ways to refine its crude oil locally and fixing the economy instead of paying trillions in subsidy annually.

She started with plenty of butterflies in her tummy. By mid-debate however, those butterflies were largely perching on the doors of the hallway.

Getso spoke relatively well on fiscal restructuring, the YPP’s plan to stimulate innovation through a venture capital  fund, while touting Kingsley Moghalu’s economic credentials whenever she had the opportunity to do so. She was deferring to him most of the time, a pointer that they both sing from the same hymn sheet.

She was flat on other policy discussions however, preferring instead to repeat her bare-bone points.

On the night’s evidence, however, Getso is a plus for the Moghalu ticket, warts and all. Considering her age (She's only 37) and inexperience on the political scene, we should cut her a bit of slack perhaps.

He was on the defensive throughout as expected. Brilliant on the delivery and elocution--a forte for him.

However, like Obi, Osinbajo made some wild, exaggerated claims. When he said Nigeria currently produces a chunk of the rice it consumes, not a few Nigerians were left raising puzzled eyebrows. Millions of Nigerians would tell you for free that locally produced rice is almost never on the market shelves when they go shopping.

"We are producing 90 percent of the rice that we consume and we are importing only 2 percent of what we used to import", Osinbajo said without wincing. This statement is definitely not supported by current realities.

It is also not true that the Lagos-Ibadan Expressway was practically abandoned under Goodluck Jonathan. There were a few attempts to fix the road in the preceding dispensation, although not enough to get any real work done.

Osinbajo’s attempts to defend the petrol subsidy regime as some kind of panacea to economic improvement, was also weak and scattergun.

But the vice president delivered some sucker punches of his own when he called out Obi for talking about how Nigeria was destroyed when it was in fact the opposition PDP that supervised some of that destruction; and when he flattened Obi who posited that fighting corruption doesn’t really matter.

“You can’t leave your shop and be chasing criminals”, Obi said to applause from what was largely an unruly audience.

“If you allow criminals to steal everything, there will be no shop”, Osinbajo clapped-back to more applause.

Good outing overall from Osinbajo as you would expect from a born talker.

The presidential debate will take place on Saturday, January 19, 2019.