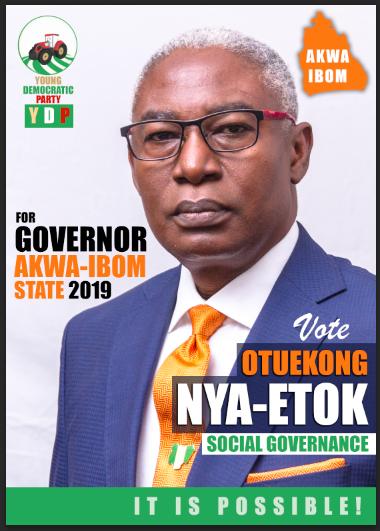 Arc Ezekiel Nya-Etok, the Principal Partner of Novone Consult Limited and Director General of Nigeria First Project, is an icon of great  repute with the trademark of excellence  and enviable records particularly in the area of Housing Development which has earned him meritorious recognitions at national and international levels.

He is committed to transferring his professional experience and knowledge repertoire to the dire need in running of government, by contesting the 2019 governorship election in Akwa Ibom state on the platform of Young Democratic Party (YDP).

Arc. Ezekiel Nya-Etok was born on All Saints day on November 1, 1963 in Nsiak Town of Ikot Ekpene Local Government Area in Akwa Ibom state. He had his primary education in Government Primary School, Ikot Obong Edong, Ekoi in  Ikot Ekpene L.G.A. He later moved to Federal Government College, Warri, in the present Delta State for his secondary education.
At age 21, he graduated with a B.Sc (1984), and M.Sc in Architecture (1986) degrees from the University of Nigeria at the age of 23. He thereafter took part in the National Youth Service Corps scheme at Ramat Polytechnic, Maiduguri, Borno State.

Arc. Ezekiel Nya-Etok was born to the family of Lady Ekaette and Chief Jacob Nya.
He got  married at the age of 25 to his university love, Chika, who is an accomplished medical practitioner. At age 31, the marriage was already blessed with their three lovely children: Aniekan-Abasi, Ini-Abasi and Eme. When Arc. Nya-Etok clocked 50-year-old, his three children had become university graduates, and at 54, Arc. Nya-Etok became a proud grandfather.

Today, at age 55, Arc. Nya-Etok believes that his primary mission in life has become to give back not only to the state (Akwa Ibom) that aided his education through the provision of  bursary support, but also to his country, Nigeria, which provided him with quality education in the first place.

Arc. Ezekiel Nya-Etok is a Born-again christian believes that his love for God can only be best expressed in selfless service to humanity - a belief that he anchors on John 13:35, which says: "By this shall all people know that you are my disciples, if you have love for one another".

Arc. Ezekiel Nya-Etok has been at the forefront of housing development, having devoted over thirty (30) years of his life to advocacy for 'Social Housing' -a housing delivery that primarily targets and benefits No, Low, and Lower-middle income earners.
Arc. Ezekiel Nya-Etok is reputed for the qualitative execution of several housing development projects across state and national boundaries.

Similarly, on account of exceptional housing development initiatives, Arc. Ezekiel Nya-Etok, having become the first Nigeria to obtain the famous Shelter Afrique housing facility for any state government in Nigeria at the humble age of 37, secured the buy-in of the erstwhile Governor of Akwa Ibom state, Arc. (Obong) Victor Attah to construct the popular Shelter Afrique Housing Estate in Uyo in the year 2000.

The Shelter Afrique housing  project benefited over 700 indigenes as contractors. It also productively engaged over 10,000 artisans, labourers, suppliers, petty traders and the likes. The project thus became a tool and national model for poverty alleviation.

Arc. Nya-Etok's sense of social responsibility was further corroborated by his sole decision to spend hundreds of thousands of naira to decorate public spaces in Akwa Ibom state during Christmas particularly in the year 2000 so as to beautify the state -chief of which was the elaborate lightening and decorating of the roundabout by Ibom Plaza which was erroneously assumed to have been a government contract. His philanthropic gesture is nationally attested to.

Arc. Ezekiel Nya-Etok has won the golden prize on the list of achievers. His achievements, particularly in the housing sector, earned him the moniker, 'Mr Social Housing'. He has also won several awards and recognition nationally and internationally, few of which are: The Nigerian Housing Man of the Year Award 2014, the Excellence Award by Nigeria-Atlanta Chamber of Commerce, in Atlanta, USA, special recognition by the revered Akwa Esop Imaisong Ibibio, the Akwa Ibom community in diaspora at their annual convention in Philadelphia, and numerous other national and international awards.
As one of the most decorated Nigerians in the housing sector, Arc. Ezekiel Nya-Etok has served on virtually every housing committee at the federal level while also consulting for different states of the federation, and the sub regional body NDDC, hence his frequent travels within and outside the shores of Nigeria.

Arc. Ezekiel Nya-Etok's professionalism and immeasurable achievements have worn him a badge of honour as a Fellow of the Nigerian Institute of Architects. He has also been conferred the 'Otuekong' traditional title, which makes him a decorated General of Ikot Ekpene, the headquarters of Annang land in Akwa Ibom state.

Arc. Ezekiel Nya-Etok forayed into elective politics in 2007 when he became one of the aspirants that sought to clinch the ticket of People's Democratic Party (PDP) in its primaries prior to governorship election. He proved himself a worthy leader and the right man for the top job by maintaining that "politics must be seen as divine call to SERVE the people".

However, in 2010, Arc. Ezekiel Nya-Etok officially left the PDP and became non-partisan until 2016 when he was instrumental to founding the Young Democratic Party (YDP). He served as the Pioneer National Chairman of the YDP and subsequently handed over the chairmanship to the younger ones as he had earlier promised. The political party was and still is at the vanguard of the 'Not Too Young To Run' movement. His roles in the party and revolution in youth participation in politics effectively made Arc Nya-Etok the father of youths participation in politics in Nigeria. This is besides his national "Youth Headmaster" title as he's reputed for not ply mentoring youths acrid the country and beyond, but always 'whipping' them back to their senses with his #NotToo YoungToTakeResponsibility" disposition!

Arc. Ezekiel Nya-Etok is now riding on his personally conceptualized political ideology - SOCIAL GOVERNANCE - as he embarks on a rescue mission to Akwa Ibom state with the aim of turning around the fortunes of the state and restoring the  dignity of its sons and daughters. He intends to actualize that vision by contesting the governorship seat of Akwa Ibom state on the platform of Young Democratic Party (YDP).