October 08, 2018
It was a coming together of the Who and Whos across Nigeria with some guests from the USA, on Sunday, when US largest hotel and hospitality chain Hawthorn Suites by Wyndham relaunched and reopened for business in Abuja. It was a delightsome morning when the ceremonies began. 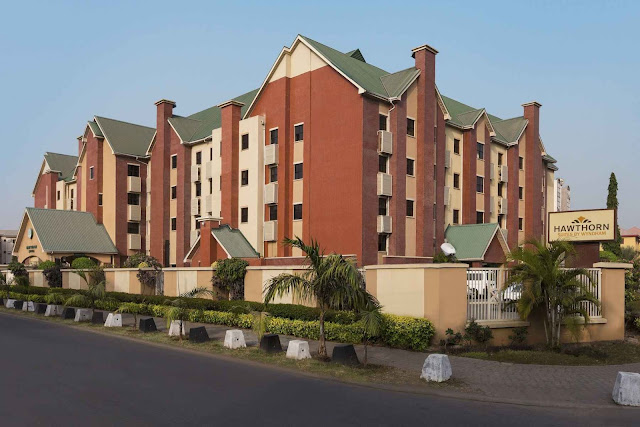 The hotel which was the first to be established in Africa, now has Shelter suites and hotels as the new managers and has an ambience that is like home. It is not a surprise that their payoff word is "...less than checking in, more like moving in".

The Governor of Niger state, Mal. Abubakar Sani Bello promised that Niger state would patronise the hotel while asking for such a hotel built in their state as well.

The Current FCT minister, Alh. Mohammed Bello who was the host thanked all real estate investors like the Urban shelter and stressed the need for more bed spaces and properties as population of residents increase in quantum of 9% yearly, thanking the hotel management for the great stride in hotel investment.
Giving the vote of thanks, Saad took the liberty to stress the features of the hotel and the legacy it has made for years, just like we mentioned earlier here.


The Managing Director of Hawthorn Suites stressed their value system being to empower the community by providing jobs since the hotel and hospitality business is the second largest employer of labour after Subsistence farming - which is applaudable.

Speaking at the event, the keynote speaker, Mal. Nasir Elrufai promised that government delegations from Kaduna state would patronise the hotel as it would be an investment well made. The hotel hosted all dignitaries and guests to refreshments in surplus and also gave out Discount coupons of up to 20% to invited guests on room rates.

The new improved Hawthorn suites by Wyndham is an adventure to visit and explore.