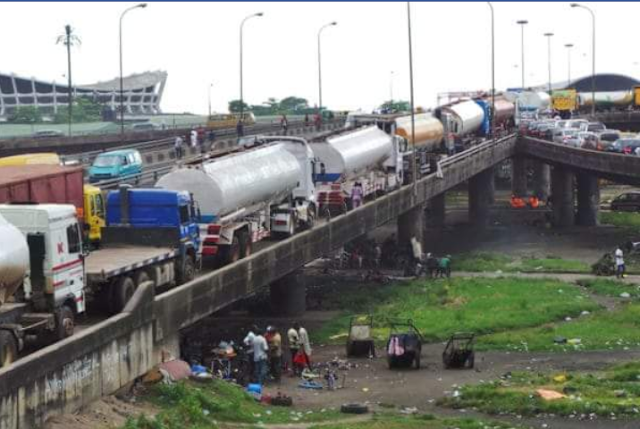 I am a born optimist; but today, let's try something else.

I sense a big danger coming.

I sense a mayhem, an utter disaster

We are sitting on a massive time bomb and, if it goes off, we would all be consumed.

But the reality is before us, before Lagos State Government to curb before it happens.

Eko Bridge is a big accident waiting to happen!!!!

Please note the exclamation marks; I am literally shouting it.

We have been seeing droplets here and there, warning us that there is a cloud of heavy rain of woes coming.

Number one, Eko Bridge is old.

A bridge built as far back as 1965 and 1975 by Julius Berger is old in relation to Lagos urban migration and increased vehicular density.

Even my Grand Mother knows this by mere looking at it.

Drive as if you are heading towards Ijora, around the stretch of Apapa, you will cringe!

Then thirdly, but worst till, we have an endless queue of heavy trailers snaking through an old, weak bridge on a daily basis.

Eko Bridge is the shortest bridge among the 3 main bridges connecting Mainland and Island.

Yet, it carries the entire burden of stress and strain that scares the freaking daylight out of me.

On my way to a business meeting yesterday, I passed through that bridge and I could smell the pong of death, of pain, of likely collapse.

The kind of thing we see in Tom Cruise's movies, where bridges are torn apart and dead men and women and children are left in their wake could happen here.

For whatever it is worth, I am writing this to point our attention to this and stare serious conversations and actions around this.

We never learn as a people, as a government.

We are so careless, so lazy to be proactive in our affairs.

I am sure we have forgotten the recent Lagos-Ibadan Expressway Inferno.

Who even remembers the Ikeja Bomb Blast?

Nah, instead we are here busy arguing over 4 eggs, Adeniyis, Shaku Shaku, about feminism, and about Saraki.

If it happens now, we will run and be looking for graphic designers to cook up 'PRAY FOR LAGOS' design to use on our DPs.

These heavy trailers building permanent site on that Eko Bridge is a complete barrel to our face.

When it pulls, we won't survive it - period!

Lagos State Government, this is your sub.

Take it and distribute it accordingly to every Lagosian.