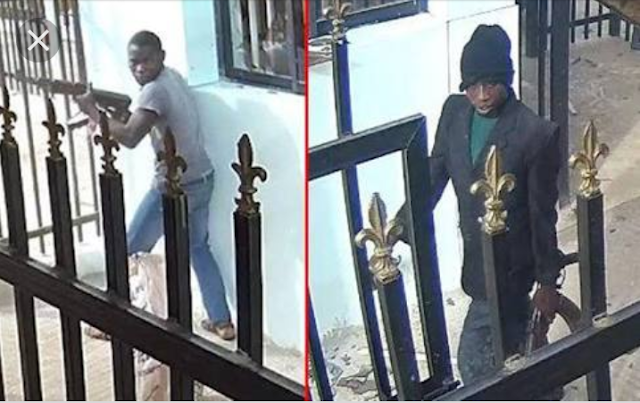 Journalists: Can we meet you ?

*Suspected Gang leader:*
My name is Ayodele Akinnibosun aka (Haywhy), I am the chairman of Liberation Youths movement Kwara South, I work for Senate president and Governor Ahmed as political mobilising youth and we have been working for long time since he was Governor of kwara.


*Journalists:* Be specific. What exactly do you do for Saraki, what type of works ?

*suspected gang leader:* we mobilise and do political arrangement for him in kwara south

*Journalists:* Describe the work you do, what the police PRO said has to do with Robbery and that is weighty,  you are talking politics and that is light. What do you do for Senate President?

*Suspected Gang leader:* where we can't win, we make arrangement there, we scatter elections if we don't win

*Journalists:* what is the connection between the robbery and the Senate President

*Suspected Gang leader:* The connection is that for example , this car was given to me by His Excellency through the Chief of Staff of Kwara state as a gift from leader

*Journalist :* Who's His Excellency?

*Journalists:* please what has offa robbery got to do with your story , did you participate in offa robbery?

*Suspected Gang leader:*  Yes I participated in the Offa robbery , I used this Lexus car given to me for the  operations in offa robbery

*Journalists:* In rowdy session.......,  what was the plan ? They gave you  a car for political mobilisation or thuggery issue but you move it  into robbery , we want to know the link , you are telling us a different thing ,  *did the Senate president or governor send you to be killing  or stealing from Kwara people* ,simple and straightforward,  that's what we want to know ?

*Suspected Gang leader:* The Senate president and Governor of Kwara state , we have been their political thugs , that's what encouraged us to the robbery

*Suspected Gang leader:* it was through this ....ehehn.... one ex ,  retired police officer,Micheal , .... *dismissed police officer Michael  Adikwu*, *he was the one that comes with armunitions*

*Suspected Gang leader:* *No! They did not send us for the robbery but because we are their political thugs , that's what led us to the robbery*

*Journalists:* *you have access to governor and Senate president, there's nothing you need that they won't give you , why did you have to engage in robbery with all these opportunity ?*

*Suspected Gang leader:* *It is devil that pushed us*