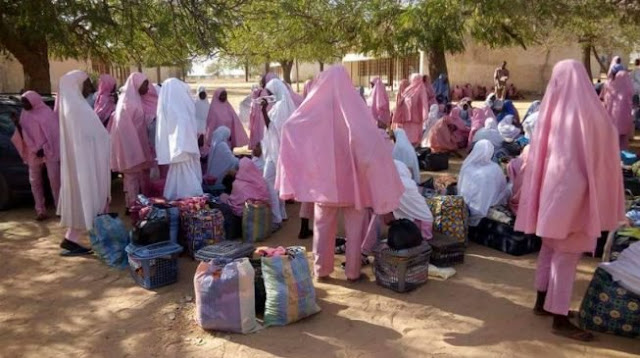 Report reaching TNN is that Five of the 110 girls has died in Boko Haram's custody.
It will be recalled that Girls of Government school in Dapchi were whisked Away from their school over a month.

According to Sahara Reporters, the terrorists arrived Dapchi 9 vehicles with the Giels in them the  same way they took them away.

"There was confusion in the area as members of the community scampered into the bush as the terror group appeared in the area, first dropping off one of the girls in a nearby village and then driving into the center of Dapchi town to drop off the rest of the girls. Five of the girls are dead according to our source. It is not clear if the Nigerian government paid any ransom to get the girls released", the Sahara Reporters statement read.

Stephanie Hegarty an international correspondent with the BBC writes that; "Initially called scared, people were fleeing. Then they saw the girls in a big vehicle. Unclear whether BH militants exited town yet.