The Nigerian Senate on Tuesday 20th feb 2018 condemned the annihilation of a building housing a faction of Kaduna State All Progressives Congress (APC) Secretariat. 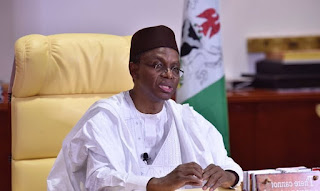 It has been reported that the building which belongs to Sen. Suleiman Hunkuyi representing Kaduna North Senatorial District. The News Agency of Nigeria (NAN) reports that the demolition was carried out under the supervision of some armed security operatives.
The resolution was as a result to a Point of Order raised by Sen. Shehu Sani (APC-Kaduna) during Tuesday’s plenary at the national assembly.

Rising order 43, Sani said that: “In the last two and half years, we have been faced with tyranny and open dictatorship in Kaduna State.

“My constituency office was attacked by violent thugs and it has also been clear that armed military personnel and policemen have been consistently used by the governor to intimidate and harass people who don’t agree with him.

“How can a governor, a democratically elected governor, demolish a house without notice simply for the fact that we have set up an office different from the one he had personalised  as a so-called party man.

“It is of concern to us that these actions by the governor had been done in the name of Mr President whom he believes, he is his son that he so much loves,“he said.
Sani, however, called on President Muhammadu Buhari to caution the governor who has unleashed a reign of terror in the state.

In his statement, the Deputy President of the Senate, Ike Ekweremadu, who presided, condemned the act saying democracy had no place for tyranny and this kind of impunity.
“If we decide to go on the path of democracy, we must accept some of the things that come with it, and one is the rule of law.

“If we have any kind of grievance, that grievance should be settled in the law court and not using force or the weight of our office. I believe this is one of the reasons why Nigerians are opposed to issue of immunity especially for chief executives.
“This is something we need to watch. As we head toward 2019, we must appeal to politicians not to overheat the system and then imperil our democracy.
“There is a limit to the patience of our people,” Ekweremadu said.

“I do hope that if it is true, the governor will make effort to go and rebuild the house or pay him adequate compensation. We condemn the act,“ he said.
Sen. Suleiman Hunkuyi while briefing news men in Abuja said the act is “bizarre, rare and unimaginable decisions.

“My property which doubles as the state APC office in Kaduna is part of my contribution to the party, the structure of leadership of the party has been brought down.
“This action carried out with his supervision. I have no case, I have forgiven him as a person, I am not joining issues with him, and he is my brother.
“There are concurrent issues that go with his act. What will he be doing at the site at that time of the day.
“To me, if the intention is to shut Hunkuyi down, it has given me more reason to believe, and stand strongly with majority of the electorate. This should not have happened but it has happened, let that be an incident for growth of democracy in my constituency.
“Should I bear the consequences of bringing him to leadership? Is it too much price to pay? People like that have no business in executive position,“he said.

It will be recalled that there are 2 factions of APC in Kaduna state, and one if the faction recently suspended the governor of Kaduna state, resulting to the demolition  of their office.