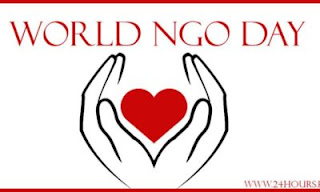 The African Centre for Leadership Strategy and Development joins the rest of the world to celebrate NGOs across the globe for their immense contribution to the growth and development of countries around the world.
February 27 of every year is a day officially set aside to celebrate, commemorate and collaborate - the various NGOs around the world, and the people behind the numerous, live-changing and hope-giving initiatives and interventions that have contributed to society all year around.


A release by Ms. Victoria Udoh, Programme co-ordinator of the Centre said “The World NGO Day is an international calendar day that is annually observed on the 27th February. It was officially recognized and declared by the 12-member countries of the IX Baltic Sea NGO Forum of the Council of the Baltic Sea States in 2010. It was marked for the first time in 2014 by the UN, EU leaders and international organizations with the Ministry for Foreign Affairs of Finland as the host”.
She further said “This year, marks the fourth commemoration of the World NGO day and it is an opportunity to pause and reflect on how far we have come as NGOs, where we are and where we intend to be. The need for this reflection stem from the current global increasing shrinking NGO space because of the rise in government activities across the globe using laws, policies, and practices that inhibit the ability of citizens to exercise their rights and the freedom of civil society actors to operate freely, without fear or intimidation”.
She added that, “recently the wave is beginning to gain momentum in Nigeria”, just as she said that this is aptly the case as these recent activities by the government contravenes the international human rights law and the fundamental rights provisions in the Nigerian Constitution, which guarantees freedom for peaceful assembly and expression. These provisions guarantee that Civil society and citizens should be able to express their opinion, including carrying out peaceful protest, etc. Stating that Countries like Nigeria, Kenya, Uganda, Singapore, etc. are currently under severe threats of closing civic space.
The release urged civil society organizations across the globe and particularly those within the African continent to close ranks, collaborate to void any threats to their existence.