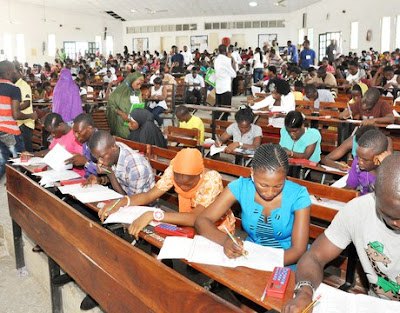 The Joint Admissions and Matriculation Board, JAMB, has fixed February 6, as deadline for the sale of registration form for 2018 Unified tertiary matriculation examination (UTME). It also fixes March 9 to 17 for the 2018 Examination.

The Registrar of the board, Ishaq Oloyede, said this at a meeting with stakeholders in Abuja. The theme of the meeting is “Strategic planning on the conduct of the 2018 Unified Tertiary Matriculation.” Mr. Oloyede said the mock examination initially scheduled to hold between January 22 and 24 has been moved to the first week in February due to the ongoing strike by non-teaching staff of universities. “We are unable to access our CBT centres because most of them are in the universities and non teaching staff are on strike,” he said. “Regarding the sale of forms, about 10 per cent of the expected candidates have registered, the number of candidates that have registered now is about 283,319,” he said.

The registrar said the prohibition of materials is applicable to candidates, supervisors and examiners. “No candidates, examiners, invigilators will be allowed to enter the examination hall with wrist watches, pencils except HB pencils …and cameras” he said. Professor Oloyede said only 283,319 candidates had registered for the examination. The registrar said: “Because of the criticisms that trailed the sale of entry form for a month in the past years, the board has decided to earmark two months so that every willing candidate will be able to purchase, fill and submit the forms.

“We opened entry from December 6, 2017 to February 6, 2018, but one month later, only less than a quarter of the two million candidates expected for the examination this year have registered.”

Prof. Oloyede said its mock examination slated for January 22 would now hold in first week of February. He blamed the shift of the mock examination on the strike embarked on by members of NASU, noting that the strike made the CBT centres in affected tertiary institutions not available for accreditation. The JAMB registrar also banned the use of wristwatches, biros, pencils and other devices from the examination hall. He added that the ban affects both candidates and examination officials. Oloyede said:


“The Board has prohibited additional materials during the 2018 UTME in the examination hall. These include wrist watches, biros, calculator, biros, pencils except the common HB pencil, and any other device that can store data, transmit or receive signal no matter the form. These prohibitions are not only applicable to the candidates but to all examination officials. The reasons for this will be provided shortly. “Scanned pictures of candidates are no longer accepted for registration, except live capture at the accredited CBT Centres as part of the Registration Procedure. Furthermore, candidates’ pictures will be embossed on all candidates’ documents generated by JAMB henceforth,” he said.

The registrar also disclosed that Minister of Education Malam Adamu Adamu has queried 42 institutions for charging candidates more than N2000 for their post-UTME.

“There is nothing wrong with post-UTME provided that our candidates are not extorted. The honourable minister of education queried about 42 institutions for charging more than N2000. We made recommendation to the minister and the minister said all of them should refund the money. He gave them two weeks and all of them are making refund now. “


He has put his feet down that all excess charges should be refunded and people can testify to the fact. Where they have the list they are paying them directly and in this case where Vice Chancellors proved clearly that those candidates could not be traced the minister has given appropriate directive. “Candidates are reporting back to us. In one case where they could not, the minister directed that they should pay the money to a non religious orphanage, orphanage owned by the state or anything because those people couldn’t be traced,” the registrar said. According to him, the figures being paraded as qualified candidates to write its examination was not true.