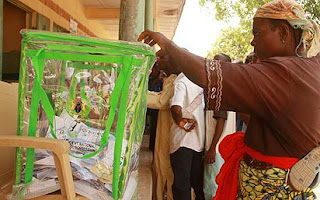 In October 2017, the Chairman of the Independent National Electoral Commission (INEC), Professor Mahmood Yakubu, announced to the delight of Nigerians that it is making arrangements with the Nigerian Prisons Service to allow some classes of prisoners to vote in the next general elections scheduled for 2019.

This development was greeted with glee and exhilaration as Nigerians began to envisage hope in the Nigeria of our dream. The announcement signaled Nigeria assuming its place in the comity of nations who have since keyed into this laudable democratic etiquette. Prior to that belated announcement, the Federal High Court, Benin-city, Edo state had in 2014 ruled that inmates of prisons across Nigeria have the right to vote in all elections conducted in Nigeria.

The suit that led to that judgment was instituted by one Victor Emenuwe and five others on behalf of inmates in Nigerian prisons. They prayed the court to allow prisoners to register and cast their votes at any election. They also prayed that delineating them from participating in elections constitutes an infringement of their rights as citizens of Nigeria as enshrined in Section 25 of the 1999 Constitution of the Federal Republic of Nigeria which confirms the definition of who a citizen is; as well as section 12 (1) of the Electoral Act, 2010 which spells out who qualifies to vote.

Ruling on the matter in December 2014, Justice Mohammed Lima granted their prayers thereby necessitating the move by INEC to allow prisoners to vote for the first time ever in any election. Considering the number of inmates in various prisons nationwide which is put at over 65,000 and the statistics of those awaiting trial, who, in the eyes of the law are presumed innocent until found guilty, it is forthright and just that such persons be allowed to exercise their franchise.

With the nod for prison inmates to vote in the forthcoming elections, Nigeria has joined the league of countries such as Denmark, Finland, Ireland, Sweden, Spain, Switzerland, and so many others who assent their prisoners to vote in elections. Africa is not left out of this democratic revolution as Ghana and Kenya have approved their prisoners to vote too. In 2010 when Kenya held a referendum on a new constitution, prisoners petitioned and won the right to vote on it. Hence, Kenyan prisoners voted successfully in the 2017 Presidential election for the first time ever. Likewise in Ghana, the Supreme Court had also in 2010 upheld the rights of prison inmates to vote in general elections.

Consequently, the Electoral Commission of Ghana registered a total of 2,276 prison inmates who voted in the 2016 Presidential and Parliamentary elections, also for the first time. Nigeria prides itself as the Giant of Africa in all facets and endeavours. If truly that we are Africa’s giant, then the planned involvement of prisoners to vote in the next election should be considered a milestone in our democratic journey. There are many benefits to be derived from enfranchising prisoners.

First and foremost, when prison inmates are allowed to exercise their franchise in general elections, they will be motivated and consider themselves part of the larger society. This will immensely facilitate their rehabilitation, reformation and eventual reintegration, which is the cardinal reason of why they are incarcerated in the first place. A British Penologist and Commissioner of Prisons, Sir Alexander Paterson wrote that the secret of discipline is motivation, and when a man is sufficiently motivated, discipline will take care of itself naturally.

Hence, the gesture of allowing prisoners to vote will be productive, as it will ingrain discipline in them making them better citizens of Nigeria when they rejoin the larger society upon release. Disallowing prison inmates from participating in elections creates a kind of a caste system, one that is eerily similar to the dark chapter of slavery of our past. Being a prisoner does not strip one of being a citizen. Infact, citizenship is not a right that expires upon misbehavior. A prisoner continues to be a citizen while serving his or her jail term, except for those on death row who are awaiting the gallows. Hence, imprisonment only revokes the prisoner’s liberty, control over everyday interaction with loved ones and freedom of movement, not their rights as citizens. Being that the aim of imprisonment is to reform the prisoner, it is rational that they be allowed to at least exercise their franchise in selecting who leads them.

Sir Alexander Paterson again opined that people are sent to prison as punishment and not for punishment. This means that being confined alone is enough punishment, and such person should not be further deprived of the right to participate in fundamental civic activities such as having a say on who superintends over the affairs of his or her country. Allowing prisoners to vote is transformative; while delineating them can imprint political apathy in them even when they are out of incarceration.

As matter-of-fact, enfranchising prisoners will provide a fulcrum where they will have a say and put forth their political opinions towards national development. Again, prisoners need to vote to serve as the natural defenders of their own interest. Prisoners have interest too! With the debilitating state of infrastructure in our prisons, the right to vote will accord them a leeway to elect leaders who will better their conditions therein. By doing so, they could substantially improve the general prison system and the condition of prison facilities. Allowing them to vote will also reduce inhuman practices and water down tension which are recorded in there. Enfranchising them will speed up prison reforms which have been comatose. Successive governments have paid lip service to prison reforms with no political will to execute them.

Hence, enfranchising prisoners will put those at the helm of affairs on their toes to better the prison constituency or else be voted out. In order to make the participation of prisoners in the forthcoming 2019 election possible and successful just like have been recorded in Ghana and Kenya, the Independent National Electoral Commission (INEC) must carry out a voracious voters’ education and enlightenment in prisons. Since some of these prisoners may not be in tune with happenstances in the outside, there should be orientation on voters’ behaviour and voting process.

Again, the INEC should collaborate with the Nigerian Prisons Service to define the classes of prisoners to participate in the elections. For obvious reasons, those on death row should not be allowed to participate in the process. INEC should also set up registration and polling centres in prisons to capture those who are yet to get registered, while modalities should be put in place on how prisoners who have already registered before imprisonment can vote.

This can be resolved through setting up a special biometric system to identify voters, thereby allowing them to vote irrespective of where they registered. The notion of imprisonment is tilting away from being punitive to correctional-based. Prisoners are getting formal education while serving their terms. It is no longer news that prisoners are acquiring university degrees in prison. That is the way to go if we must fight crime head-on in our society.

The cheering news that prisoners will vote in the forthcoming election is another landmark for Nigeria and has opened a new vista in our burgeoning democracy. Therefore, let all Nigerians support the Independent National Electoral Commission (INEC) and the Nigerian Prisons Service to achieve this great feat.