January 30, 2018
The People’s Democratic Party, PDP has described the the anti-corruption Champion conferred on President Muhammadu Buhari at the African Union Summit as laughable, derisory and African joke of the year. 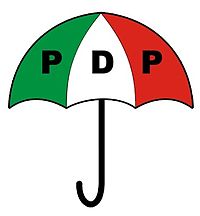 This condemnation was contained in a statement by the National publicity secretary of the party, Kola Ologbondiyan.
The PDP said it was embarrassing that the Presidency, in its desperation to launder its irredeemably dented image, would resort to exporting its deceptive proclivities to the international arena.
Ologbondiyan said African Union were not well briefed of the happenings in Nigeria, hence, the honour.


The party said the AU would not have honoured President Buhari if it knew the depth of persecution of opposition figures under the guise of war against corruption, while officials of his government swim head deep in corruption under the overt protection of the Presidency.
“As we speak, those receiving accolades as champions of anti corruption have not yet cleared the air on the leaked memo detailing underhand oil contracts to the tune of N9 trillion ($25billion dollars) at the Nigerian National Petroleum Corporation (NNPC) and the Ministry of Petroleum Resources which are under President Buhari’s direct supervision as minister.
“They are yet to offer any explanation on series of reported fraud in the oil sector including allegation of the use of 18 unregistered companies to lift and divert N1.1trillion worth of crude oil in the last one year to service the All Progressives Congress (APC) interests.
“This is a government which has provided cover for its corrupt officials including former state governors, who were indicted of looting funds belonging to their states to sponsor their Presidential election in 2015 as well as cronies openly indicted for other various sharp practices, including padding of federal budget, secret oil subsidy deals and stealing of funds meant for fight against insurgency and rehabilitation of Internally Displaced Persons (IDPs).
“Perhaps AU leaders need to know that the Presidency has virtually failed to do anything regarding the heinous diversion of N5 billion meant for the IDPs under the Presidential Initiative on the Northeast for which the Senate mounted a stiff investigation, only because officials of APC government was indicted.
“They might also need to be shown the motion by Senator Baba Kaka Garba from Borno Central, who exposed how some individuals, known to have connections with the APC, fraudulently cornered N1.2 billion from the Federal Government under the guise of supplying items to IDPs, only for the money to be diverted for other purposes which are related to APC interests.
“Furthermore, the AU might need to know that the former Secretary to the Government of the Federation (SGF), who was openly indicted by the Senate for stealing funds meant for IDP activities, was only arrested after a public outcry but was quickly released with a pat on the wrist, while opposition members facing similar charges are being detained and persecuted with spurious charges in various courts.
“The truth lies bare that the Buhari administration is not engaging in any fight against corruption but political witch-hunt of opposition, while his government reeks with corruption,” the PDP said.